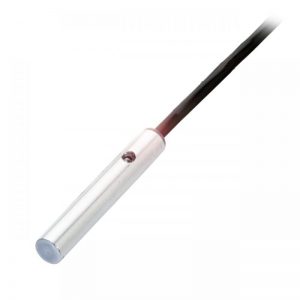 Miniature capacitive sensors can come in a cylindrical or wafer-style in order to fit the most compact spaces. These types of sensors have several uses, including controlling and monitoring machine process, and acting as detectors for counting jobs. To afford the best fit in tight spaces, miniature sensor heads require the use of an external amplifier. The potentiometer on the external amplifier allows for sensitivity adjustment.

Not to be confused with the cylindrical miniature sensors, these types of capacitive sensors are larger than the miniatures, ranging from ∅6.5 to M12 and M12 to M30. They have an adjustable sensing distance and we offer both flush and non-flush mounting options.

For applications that are put under extreme temperatures, high temperature capacitive sensors are the way to go. These can still function even while in direct contact with hot materials and temperatures, detecting levels for liquids and bulk goods even under the most extreme circumstances.

Interested in learning more about capacitive sensors or any of the other industrial-grade sensors we offer at Locon? Feel free to give us a call at 800-356-2661, or contact us online today!